Swami Chinmayananda, the founder of Chinmaya Mission, was born in 1916, in Cochin, India. Not satisfied with degrees in literature and law or with other worldly aspirations, he pursued the spiritual path in the Himalayas under the guidance of Swami Shivananda and Swami Tapovanam.
He taught the logic of spirituality, while emphasizing the balance of head and heart. Selfless work, study, and meditation are the cornerstones of spiritual practice, he said. He is credited with the renaissance of spiritual and cultural values in India and with awakening the rest of the world to the ageless wisdom of Vedanta.
His legacy remains in the form of books, audio and video tapes, schools, social service projects, more than 300 full-time Vedanta teachers whom he taught and inspired and more than 300 Chinmaya Mission centers around the world serving the spiritual and cultural needs of local communities.

Pujya Guruji has served as acharya of the Sandeepany Institutes of Vedanta both in India and California. He has written commentaries on scriptural texts, translated Pujya Gurudev's commentaries into Hindi, and authored a number of books. One of his key contributions is ‘Hindu Culture: An Introduction,’ a text acclaimed for its clear description of the basics of Hinduism and adopted as a text in some American high schools.
Pujya Guruji excels in expounding a wide spectrum of Hindu scriptures, from Ramayana to Bhagavad Gita to the Upanishads. He conducts jnana yajnas and spiritual camps around the world, traveling at a bewildering pace. His easy manner and devotional rendering of Vedantic texts has drawn many newcomers into the spiritual fold.

In an era rife with skepticism and confusion about matters spiritual, Swami Swaroopananda is a rare voice that blends authenticity with accessibility; theory with self- practice; logic with heart. 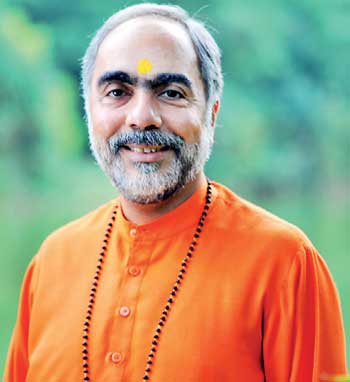 Born and brought up in the bustling commercial capital of India, Swamiji had always been convinced that beyond life’s superficial, everyday joys and sorrows, there was something more enduring and satisfying. As a child he heard from his grandmother many religious stories based on the great Indian epics and the history of saints. These stories suddenly came to life, acquiring new meaning and depth, when as an adolescent he encountered the preeminent Master of Vedanta, Swami Chinmayananda.

His heart completely moved and inspired, in 1984 Swami Swaroopananda gave up his family’s thriving business in Hong Kong to undergo intensive training under Swami Chinmayananda and Swami Tejomayananda at Sandeepany, Mumbai. He was initiated into the monastic order in 1992. Since then, he has touched thousands of lives across the world, and his tremendous work in bringing out the essential wisdom and underlying unity of all religions has garnered him a place among the vanguards of self-development philosophy.

Formerly the Regional Head of Chinmaya Mission Australia, United Kingdom, Middle East, Africa and Far East, and presently Chairman of the Chinmaya Vishwavidyapeeth Trust (University for Sanskrit and Indic Traditions) and Director of the Chinmaya International Residential School in Coimbatore, South India, Swami Swaroopananda has now been bestowed by Swami Tejomayananda the privilege to also serve as the Head of Chinmaya Mission Worldwide.

Sharada Kumar is the Resident Teacher of Chinmaya Mission Ann Arbor.  Inspired by the teachings of Pujya Gurudev, she joined Chinmaya Mission during her college years in Mumbai.  Instructed by Pujya Gurudev, she received special training in teaching Bala Vihars in Mumbai in 1974.  Furthermore, she traveled with Pujya Gurudev in 1989-1990, getting direct tutelage from Him in conducting Bhagavad Gita/Vedanta classes.  She now conducts four Bala Vihars in the Southeast Michigan area, and several classes on Bhagavad Gita, Upanishads, Bhagavatam, Valmiki Ramayanam, Devi Group, and Bhajan classes. Sharada Kumar is the National Coordinator for Chinmaya Balavihars and is on the Board of Directors of Chinmaya Mission West. She is a coordinating committee member of the Interfaith Round Table of Washtenaw County. She serves in the executive committee of the Association of Religious Counselors, closely connected with the students at the University of Michigan. She also serves in the Ethics committee of Science and Religion at the University of Michigan.
Sharadaji taught a one year Vedanta course at Krishnalaya in Piercy from 2010 to 2011.

Viswa Kumar is the architect of Chinmaya Avantika.  Inspired by Pujya Gurudev, he has been working for the mission for the past 35 years.  Using his skills as an engineer along with his devotion to Gurudev's vision, he was instrumental in the construction of the Ashram, as well as its maintenance.  He has conducted several study groups and Bala Vihar classes.